DIY Adventures: Sprucing up Our Side Entrance

Back when I started this blog, one of the things I was excited about sharing was our home improvement do-it-yourself adventures. We bought a nearly-century-old, two-and-a-half-story fixer-upper seven years ago, with the intention of slowly bringing it back to its former glory. The previous (elderly) owners had lived here for 48 years, and had not done many updates in the last quarter century. When we arrived, the place was filled with yellowing linoleum, mustard yellow and olive green carpeting, and - possibly one of the most dreadful wall coverings ever - black and brown flowered mac tac on the kitchen walls (yes, really!). Despite its off-putting appearance, the place was solidly built and had a lot of "old house charm" waiting to be resuscitated (such as the original hardwood floors under all that ghastly carpeting).

While we've managed to get the place looking a lot better than it did when we arrived, there is still MUCH to be done, and we're determined to do everything we possibly can ourselves. Thankfully, my hubby is a pretty handy guy, or we would never have considered purchasing this house.

The first thing we wanted to do was fill in the milk door, which was not in great shape and was responsible for a huge draft. While we wanted to leave as many original features on the house as possible, this one was pretty much a lost cause. Here's what it looked like after hubby ripped off the interior part of the door: 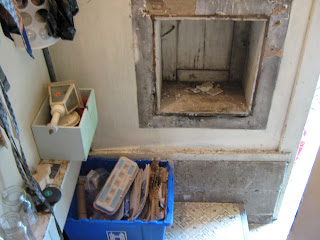 He packed the space full of insulation, then drywalled over the top of it. Much taping, plastering, sanding and painting later, it now looks like this: 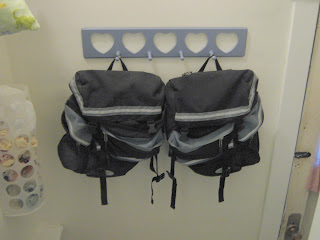 Slightly better, wouldn't you say? And now we have a place to keep our bike panniers handy (since we often run errands on our bike rather than using the van, it's nice to have them in a grab-and-go spot, rather than way down in the basement where they were previously).

The side entrance is right off the kitchen, so the wall to the left of the bike bags is designated for those items we like to keep handy to the kitchen but don't have the space to store there. This is what it looked like before: 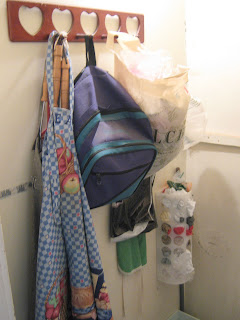 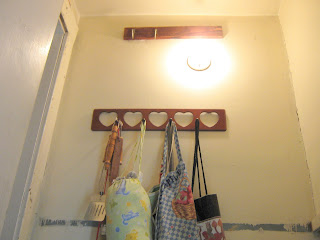 All of the corners of the walls were in terrible condition, with the plaster having cracked along most of them. My hubby had to tape and plaster all of them. While he's done a lot of different home improvement projects, he had never taped and plastered a corner before. I'm so proud of him for learning how to do this! It would have cost a lot to hire someone else to do it, and I know he's going to need this skill again for various projects.

Once again, there was much taping, plastering, sanding, and painting. It now looks like this: 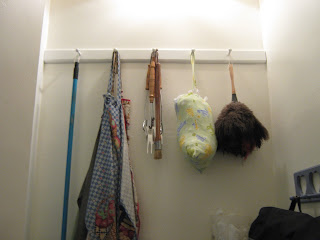 We replaced the bare light bulb with a fixture we found at Value Village: 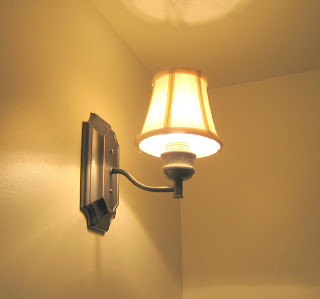 So far, our total expenses for the project have been:

69.73 for building supplies (drywall, tape, plaster, sandpaper, insulation)
10.16 electrical switch (we had to replace the old one which was falling apart)
6.76 light fixture
0.62 screw for lamp (my hubby has a large collection, however none were quite long enough!)
4.75 one quarter of a can of primer (we'll use the rest for other projects)

We were able to use leftover paint from other projects for both the walls and the heart-shaped hanger the bike bags are hanging from.


Total to date: $92.02
The next major piece will be replacing the flooring (a nice old crusty linoleum - you can see it in the first picture). My brother has offered us some ceramic tile he was unable to use for a bathroom reno at his house; he's bringing it over in a couple weeks so we'll be able to see if it's going to work with our colour scheme. If not, we'll be exploring other options, such as linoleum remnants. The side door itself also needs painting and a new curtain, and we need to either repair or replace the screen door on the outside. I don't think we'll be painting the door until the spring now, as it's too cold to take it off for a day. I have. I have a strong tendency to procrastinate on sewing projects, but I'd really like to get the curtain done (and a matching one for the back door). I have the fabric already - from a set of curtains my friend sewed for us at our old apartment. The windows there were huge, so there is plenty of material to work with!


I'll be sure to post another update as more progress is made.
Posted by Karen McLaughlin at 11:39 AM