Having Ourselves A(nother) Simple Little Christmas... 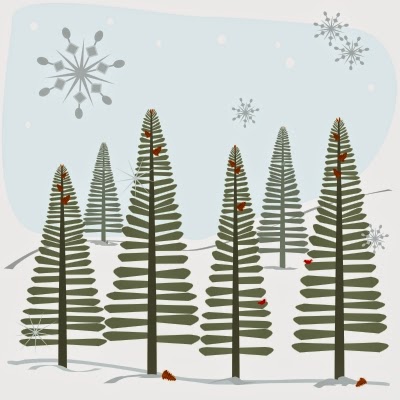 It's three weeks 'til Christmas Eve and I haven't written a word about Christmas here on the blog yet this year - WHAAAT?!? Yeah, things are a little behind schedule for someone who advocates starting to think about Christmas in September. I don't even have an impressive excuse, other than that I needed to take a mental break from blogging for a while. That doesn't mean I haven't been busy coming up with a gift-giving plan for this year...I'm just a little late in sharing it with you!

Our Christmas plans this year are very modest because, to be frank, it's been a hugely challenging year for us financially. This was one of my husband's slowest years in his business in recent memory, and we also had a huge car repair bill to deal with last month. This would be quite discouraging, except for the fact that, in looking back over the years, I'd have to say that the majority of our Christmases that I'd rank as "highly satisfying" were the ones where we had to go light on the gifts and got a bit more creative in how we were going to celebrate the season. So, while it would be nice to have a bit more cash on hand going into the holidays, we're just going to have to find other ways to celebrate that don't involve spending money (and that's really okay - since technically we COULD go out and spend more by putting it on a credit card, knowing that we're choosing NOT to do that is a GOOD feeling!)

So, here's a roundup of our plans so far:

Holiday activities & entertainment
We have a few fun things to look forward to this year; due to our tight budget I'm making sure to put in a bit more effort in this area (which is usually more fun than ripping open the gifts, anyway).

A Christmas Party!
We've been meaning to do this for years, and have always come up with a reason why we "couldn't do it this year". Even though this would definitely be another year we could find lots of reasons NOT to have a party, we decided to challenge ourselves to just go for it, without expecting to throw an "over the top" extravaganza. We're holding an afternoon holiday open house this coming Sunday. We'll be keeping it pretty simple with light refreshments of cookies, chips and dip and fruit and veggie trays, with coffee, tea and cider (hot and cold) to drink. Our guests have been invited to help us decorate our tree (which is already ensconced in the corner of our living room) and we're also going to be doing a Secondhand Santa gift exchange. I'm not sure if anyone else has done this before, I made it up but I would think it's not a brand new idea. We've asked everyone to bring one gift wrapped secondhand item that they would like to pass on but that they think someone else would enjoy (so no extra tacky "gag gift" type items). All the gifts will be displayed on a table and everyone who brings one will get to pick out another to take home. So far everyone seems enthusiastic about the idea; we'll see how well it ends up going.

HPO Christmas Concert at the HPL
Joe & I will be attending the Hamilton Philharmonic's free holiday concert at the Central branch of the library this Friday at noon.

Living Advent Calendar
Our neighbourhood's doing a Living Advent Calendar for the third year in a row. Apparently this is a Swiss tradition, but I'd never heard of it until it started here in my neck of the woods. Starting Dec 1st, each day a different family in the neighbourhood unveils a holiday-themed window at their home. The list of addresses is posted online so folks can stroll around the neighbourhood and enjoy the festive decorations. We're going to take a walk around and check out the first three windows tonight :)

Gifts:
We'll be doing small individual gifts this year. This is probably going to sound weird to most of you, but 3 of the 4 of us will be receiving socks by request! My hubby and I both need new wool socks (a necessity in our cold Canadian winters!) and have a preference for Wigwam brand, which are good quality and made in North America (Wisconsin). It's kind of funny that we end up paying more for socks than just about any other article of clothing (since most of our clothes are purchased on 50% off day at Value Village!), but they are well worth it. Warm feet are happy feet! My 15-year-old wants new basketball socks, which are also crazy expensive for a pair of socks, but he gets tons of use out of them. SportChek's having a sock sale right now so we're going to take advantage of it!  My 17-year-old would just like some cash, so he'll be getting a conservative amount equivalent to what we spend on his brother.

Stockings:
We all LOVE our stockings around here! Now that the boys are well into their teenage years, their stocking stuffers are starting to get a bit predictable as they are now filled with food and gift cards rather than toys. It doesn't seem like they mind as they are happy to get some treats that we don't normally buy, plus some of our special homemade Christmas treats as well.

(By the way, for anyone looking for inspiration for their teenager's stocking, there is a great list of 97 Stocking Stuffers for Teens or Tweens over at Frugal Upstate that is handy for browsing through.).

For the boys: $5 gift cards for Tim Hortons (we have one in our neighbourhood and they love to go there with their friends), a box of Gingerbread Spice tea (one of the holiday teas by Celestial Seasonings and a favourite with both of them, bought on sale 2 boxes for $5), assorted candy (mostly homemade), pepperettes, Nutella (they're both addicted and I don't normally buy it!) and Pur gum (bought on sale, BOGO). It's a tradition in our family that an apple and a couple of clementines go in the very bottom of the stocking so that helps ensure it's packed nice and full :)

This year we'll probably add some razors and deodorant to the mix as they are going through more of both these days!

For hubby: Again, pretty predictable, but will include all the special treats he looks forward to at Christmas. He'll receive homemade candies in his stocking, plus I'll be picking up some chocolate covered coffee beans from the Mustard Seed co-op. I also snared a tin of cashews on sale for almost 50% off, so that will be tucked in there, too.

I'll probably scope out a few more small items to add to everyone's stocking while I'm over at the co-op this Friday helping to pack Holiday Gift Bags.

My dad and his new wife (they were married in March), and my grandmother will be receiving the traditional gift baskets of baked goodies and canned goods which I have been giving them for years and years, so this year will be no different in that regard. The contents vary somewhat from year to year to keep things interesting; this year's baskets - which are usually repurposed clementine orange crates - will include Cran-Raspberry Jam, Tomato Date Jam, Zucchini Relish, Candied Peanuts and Christmas Granola. Everyone will also be receiving some of my most recent batch of homemade soap. This year I decided on a grapefruit scent to keep it refreshing and unisex.

I'm sure there will probably be a few last-minute additions to this list, as there usually are, but that gives you a good idea of what Christmas will look like around here this year.

I thought I'd finish up with a few interesting holiday-related reads you might want to check out for additional inspiration:
Ten Ways for a Zero Dollar Christmas (The Nonconsumer Advocate)
One Question to Reset Your Holiday Plans (Melissa Camara Wilkins)
Holiday Shopping for Aspiring Minimalists (Minimalists.org)
How to Change Your Holiday Money Story (Bari Tessler Linden)

Need some frugal gift ideas? Check out my Christmas on a Dime page and my Homemade Christmas board on Pinterest. Starting today, I'll also be sharing one gift idea a day on Facebook and Twitter...I'd love to hear your suggestions too!
Posted by Karen McLaughlin at 3:24 PM

Email ThisBlogThis!Share to TwitterShare to FacebookShare to Pinterest
Labels: Christmas on a Dime