The Value of Cooking Creatively

Cooking from scratch is almost always cheaper than eating out (unless you're cooking lobster and filet mignon at home!) But I think the skill that sets the really frugal cook apart from the rest is knowing how to "cook on the fly" and use what they've got on hand. This skill is the difference between always having to run out for one or two missing ingredients and easily substituting with what you've already got. It's also the difference between using up all those little bits and pieces hanging around in the fridge, or letting them all go to waste. Meredith at Like Merchant Ships recently commented on this when she was faced with astronomically priced celery and a desire to make chicken salad. What to do? Get creative!

In order to be really creative in the kitchen, a cook needs to be experienced enough to know what flavours and textures will work together well, and which will yield a less-than-edible result. Starting out with small substitutions and working towards more major ones will allow you to gradually test the waters and learn as you go without wasting too much food in the process.

Last night I was rooting around in the fridge and realized I still had quite a bit of my CSA veggies left from last week (and it was time to pick up more!) So my goal for dinner was to use up the most-likely-to-spoil-soon candidates and still produce something tasty. I had half a bag of spinach and 1/3 bunch fresh basil, as well as a bit of whipping cream lurking in the back of the fridge about to expire. I also had about half a dozen boneless, skinless chicken drumsticks I had bought on sale that I wanted to use up.

A plan started to develop as I surveyed my ingredients. I recalled a dish I had made several years ago from Anne Lindsay's Lighthearted Everyday Cooking that had similar flavours, but used scallops instead of chicken. Quickly rummaging through my cookbook pile, I located the recipe. Yes, it used spinach. I could sub chicken for scallops. The basil would work well with this combination. The original called for cream cheese and chicken broth, neither of which I had on hand (yes, they're both on my Pantry List, but I'm overdue for a grocery shop!) I combined the whipping cream with a bit of coffee cream, and figured that would be a reasonable substitution taste and texture wise since heavy cream will cling to pasta nicely. I decided to add some garlic (if you haven't noticed yet, I can't really live without it!) and more parmesan cheese than originally called for (only 2 tbsp!)

Here's what I came up with: 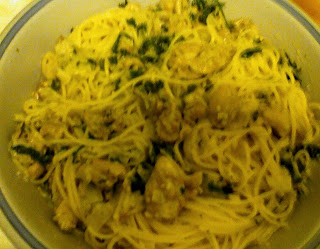 [My apologies for the rather ghastly photo - I found out my camera batteries were dead when I went to snap a pic. This was the best I could do with my hubby's cell phone camera!]

Lemony Chicken and Spinach Pasta
This ended up being a phenomenal hit with my husband - he gives it his highest rating! In case you're wondering (since there are 4 of us here) I made spaghetti with plain tomato sauce for my older son who is vegetarian (and doesn't like spinach, lol!)
Time: 30 minutes
Serves: 3 (could easily be doubled)

2. While spaghetti is cooking, saute onions and garlic in olive oil for 1-2 minutes. Add chicken and cook until no trace of pink remains. Add basil and cook 1 minute longer, then add cream, lemon zest, salt and pepper. Cook for a few minutes until hot and bubbly.

3. Add spinach and Parmesan. Cook for 1-2 minutes, until spinach begins to wilt. Remove from heat.

4. Toss sauce and pasta together and serve immediately.
Posted by Karen McLaughlin at 8:41 PM