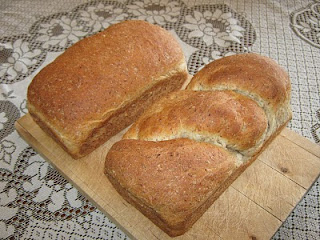 The weather this week has been glorious here in Southern Ontario. We've gotten an early reprieve from winter with a very welcome heat wave. I've been spending as much time as possible outside, since I know it won't last. It's entirely possible that we'll still see some snow again next week!

Yesterday I took advantage of the lovely weather to do the Big Bad Spring Cleanup. The one where I find out exactly how much dog poop was hiding under all that snow (the answer is always the same: way more than I want to think about!) I found a total of TEN tennis balls as I was making my way around the yard, picking up the poop and the garbage and all the little toys that seem to be there every spring, no matter how hard I try to get the yard cleaned up in the fall!

I started taking the leave mulch off the garden beds, too - the strawberry plants are already growing! I don't see any signs of rhubarb poking its way up yet. I'm hoping the rhubarb will really kick in this year (second full growing season since planting) and that I'll have enough to freeze some for the colder months.

Bread baking was also on yesterday's schedule; I used my tried and true Whole Wheat Refrigerator Dough and did one loaf plain and one loaf fancy. There's about 1/2 of the second loaf left; bread doesn't have much chance to go stale around here!

Our house-wide decluttering project slowed down for a while but we're still working away at it. I spent some time helping my dh wrestle the junk in the basement - there's a lot more to go but it already looks a lot less scary than when we started.

Next up: continue the decluttering, deal with my mending pile, and start getting ready for Easter!
Posted by Karen McLaughlin at 2:06 PM