The way the Ontario Natural Food Coop works is that you form a buying group with a bunch of other families, then place your order through a catalogue. ONFC has a set delivery route and schedule, and they deliver the entire order to the group coordinator's house on the appointed date.

Yesterday was our delivery day, and we had 23 boxes of food dropped off at our coordinator's house. The buying group is responsible for sorting out all the items into the individual family's orders, a task that usually takes a couple of hours. I helped with the sort yesterday and always enjoy checking out what goodies other members have ordered!


This is what I got in my order: 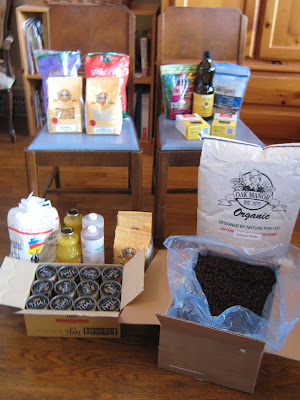 In front of the chairs:


Grand total: $208.28 (after a 1% COD discount).
Now, you may rightly be wondering why I spent such a huge chunk of our monthly grocery budget (which we aim to keep under $400) on massive amounts of raisins and oats. The answer is that by purchasing these items in such large quantities, I got really fantastic deals, which dropped the price per pound to roughly what I was paying for grocery store, conventionally grown raisins and oats. The raisins will likely last us about a year, and the oats somewhere between 6 and 9 months, so I won't have to buy them again for quite a while! That means that next time I order (in about 2 months time) I'll be able to buy other items in large quantity and get similar discounts. By staggering my bulk purchases, over time I'll build up a good stash of everything I need without ever blowing my grocery budget. I based this month's order on items we were already running low on, and next time I'll do the same thing and select which items to order in large quantity based on what we are running low on in our stockpile at that time.

Some of the particularly good deals (other than the raisins and oats) were the pumpkin seeds, which cost substantially less than what I was paying at the bulk food store for conventionally grown ones, the case of coconut milk, and the Nature Clean liquid soap (again, about half of what I was paying previously). I'm going to use the milk to make yogurt so I can have organic yogurt for significantly less than I'd pay for it at the grocery store!


I'm aiming to keep my food coop orders around $200 each time (every other month), then spend an additional $300 a month so it will average out to no more than $400 a month over the course of the year.

I'm really pleased with what I got in this order and look forward to doing it again in a couple of months!
Posted by Karen McLaughlin at 11:32 AM