A Quick Look Backwards and Forwards 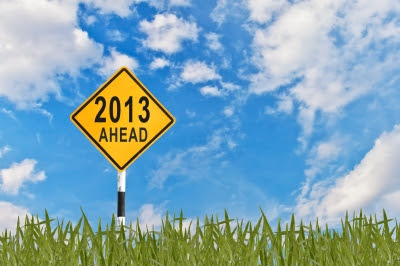 As one year ends and a new one begins, it seems natural to take stock of how far we've come towards various goals, and where we plan to head over the next 12 months.

2012 will definitely be remembered in our household as a year where things just didn't seem to want to go as planned. Last January I shared that our "big" goal was to focus on doing a lot of upgrades to our nearly-century home. We started out well by kicking off the year with our front entranceway makeover (documented here, here, and here), then promptly stalled out. There is a long, long list of things we had planned to do that did not get done because of both time and financial restraints.

Of course, it's hard not to feel disappointed about not reaching our goals. The world certainly isn't going to end because we didn't get all these improvements done, but it kind of knocks the wind out of your sails when you didn't even come close to achieving your biggest goal for the year.

A lot of things happened this past year that threw us off our game. A few of the bigger contributing factors were:
-Our income was much lower than it was in 2011, even though we seemed busier than ever!
-My younger son decided to go to school for the first time in his life (he started 8th grade this fall after being homeschooled for his entire life).
-My husband decided to make some changes with his job, leaving the team he previously worked with and forming a partnership with a new colleague (that last change happened in the fall, and we're hopeful that will lead to a significant income improvement for 2013).

In a way, it's good that we didn't get to some of these projects after all, as we've rethought a couple of things and have made some major changes to our plans. I now have a totally different idea of the layout I want to do for the office (which will be more visually pleasing *and* easily allow two people to work in the office at the same time, providing a better space for doing homework than the dining room table which is currently serving that function). We are now also planning to repurpose most of the spaces on the second and third floors of the house. My 13 and 15 year old boys are going to move to a shared bedroom in the third floor attic, which is currently our bedroom. We will move down to the second floor (the original master bedroom, which is currently our 13 year old's room). The room that is currently my 15 year old's bedroom will become a den (the "TV room" of the house). Our basement is currently unfinished and I don't want a TV in the main floor living room, so currently there's no good space for us all to hang out and watch a movie together. This room will also have ample space to become the central game/puzzle/art supply storage hub thanks to the closet we're going to fit with a bunch of shelving.

I definitely managed to achieve a few other things in the past year:
-launched my book
-did an interview for CBC Hamilton (7 Ways to Eat Local on a Budget) and a guest blog post for Random Recycling (Eleven Tips for Eating More Local and Organic Food on a Small Food Budget)
-gave presentations based on my book at the Hamilton Public Library and for OPIRG McMaster
-sold 50 copies of my book to the local Public Health Unit for their Community Food Adviser program
-developed a course based on my book that I will be teaching through the Continuing Education department at Mohawk College in the spring semester (stay tuned for more details!)
-volunteered through Environment Hamilton packing Good Food Boxes
-became actively involved with the development of The Mustard Seed community grocery store as a member of their sourcing team (doors should be opening sometime in the first half of this year!)
-learned how to negotiate the public school system :)

Now that I look over that list, it seems I managed to accomplish more than I originally gave myself credit for!

My "big goal" for this year is to contribute more financially to our household, through both book-related activities such as classes and workshops, and developing other potential income streams (which may end up being through self-employment or one of those things known as a "regular job").

We do also plan to keep working away on the plans for the house, and I'll definitely keep you all fully updated on any and all progress we make.

What were your biggest accomplishments of 2012? What are your goals for 2013?
Posted by Karen McLaughlin at 8:00 AM

Email ThisBlogThis!Share to TwitterShare to FacebookShare to Pinterest
Labels: year in review