A (Scary) Food Waste Update - Plus, What to Do with Those Leftovers!

It's been much longer than I planned for it to be since I last weighed in on my Holiday Food Waste Challenge. Unfortunately, a *really* nasty virus swooped in and felled our family the week before Christmas and we've been trying to get out from under it ever since. I'm still not 100% recovered but I managed to stumble over to the fridge and do a bit of an excavation.

There's nothing like being laid up in bed to throw you off your game, and add the biggest holiday of the year into the mix, and it's pretty much a recipe for a food waste disaster! The irony of having the most food waste we've had in a long time during my official Food Waste Challenge has not escaped me.

Here's what I dug out of the refrigerator that is no longer fit to eat: 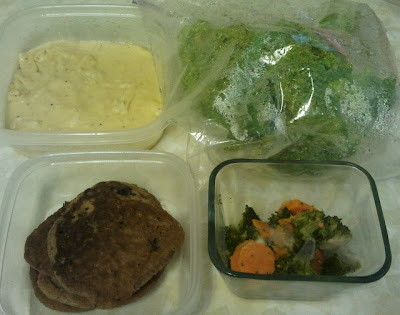 Some leftover cheese sauce from Taco Platters, 3 blueberry pancakes, a couple spoonfuls of leftover cooked vegetables, and, most unfortunately, an entire head of broccoli.

Since my last update, I also had to toss out two horrifically moldy organic lemons from a 2 pound bag I bought on sale. Whenever I buy organic lemons I always seem to forget that they spoil a lot faster than their non-organic counterparts. I also had to toss a clementine that was rotten in the middle - I don't think there was much I could have done to prevent that one, as the rest of the oranges in that box still appear to be fine.

Yeah, it's a half decent amount.of spoiled food. It does represent a full 4 weeks of food wastage, so it's still much, much less than the average family throws away. That doesn't mean I'm happy about it, it just could have been a LOT worse all things considered.

I'm hoping that you have avoided this unpleasant bug that's been going around, and that you've done better than we have on the food waste front.

If you have some holiday leftovers that still need using up, now's the time to make sure they don't go to waste!

My Everything-But-the-Kitchen-Sink Lentil Soup is perfect for using up any number of leftover tidbits - vegetables, bits of meat, and even gravy easily slide into this soup and it always comes out tasting great.

Leftover turkey or ham both make delicious versions of this coconut curry and these pinwheels.

If you need more inspiration dealing with the remnants of the Big Bird, you can find my Making the Most of Roast Turkey post here.

Swimming in a sea of leftover mashed potatoes? They can be frozen in 1 cup portions for use in my Refrigerator Bread Dough.

If it's sweet stuff that's overrunning your kitchen, most desserts lend themselves well to freezing (except things like puddings and custards, so eat those first!) Whipping cream can be whipped and dropped onto a parchment or wax paper lined cookie sheet in spoonfuls for freezing. Once the mounds of cream are solid, pack then into freezer bags for longer term storage, and you have the perfect amount to top a single dessert or a mug of hot cocoa!

How was your food waste over the holidays? Do you have a clever way to use up those festive leftovers?
Posted by Karen McLaughlin at 8:00 AM