How I Got a Gorgeous Perennial Garden for FREE!

Once the warm weather arrives, there's nothing I like better than puttering around in my garden. When we arrived on the scene seven years ago, the garden was pretty much non-existent, save for an ancient rose bush in the back yard that probably hadn't been tended for about 20 years (I'm NOT kidding - my husband needed a handsaw to prune it back!)

There were no existing garden beds in the front yard when we purchased our home; we had created some the first year we were here but started out planting them with annuals while we took some time to decide what we wanted for a more permanent "look". In retrospect, I wish I'd started my foray into perennials a lot sooner! Not only does it save a lot of money, it's a lot less work on the gardener since you don't have to plant a ton of plants at the beginning of every season.

This year our gardening budget is especially tight (basically we only have enough allotted to buy veggies and herbs). I have a large bed along the front of the house that I've been planting with shade impatiens each year, but I knew that I didn't have the money to purchase those plants. And to be honest, I was kind of tired spending hours on my knees planting all those flowers! So I decided that somehow, some way, I was going to get myself some perennials to fill in that bed.

Things got off to a good start when a neighbour down the street asked me if I'd like some ferns. She had received an unbelievable amount of them from a friend and had way more than she knew what to do with. I was more than happy to take the surplus off her hands, and planted them along the back of the bed (in front of the climbing hydrangea which runs under the porch, the only plant that was already there).

That was all the encouragement I needed to see how creative I could get with tracking down some more free plants. I had already received some irises from a neighbour, and swapped a computer desk at my yard sale for a hosta, a Rose of Sharon, some columbine and another fern, and some wild violets. Those were all tucked into my back garden bed, which I'd been wanting to expand for years. I decided to post an ad on Kijiji offering to swap plants I had a surplus of (mint, chives, hollyhocks, and raspberry canes) for any type of shade-loving perennial. I only got one response, but it was a fantastic one. A woman was looking to clear a multitude of plants out of her backyard (all of which had been planted by a previous owner). She didn't even want anything in return, she just wanted to get the garden cleared out ASAP! I did bring her some mint and chives as she decided she was going to start a bit of an herb garden. In exchange, I received enough plants to completely fill in my front garden bed: 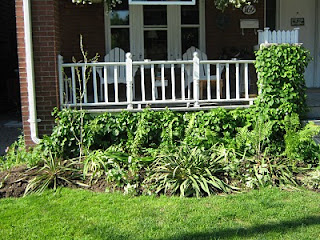 Three Yucca plants, two pink Columbine, a couple big clumps of lilies, some ground cover that I don't know the name of (please fill me in if you do!), and two Rose of Sharon bushes. I am absolutely thrilled with how it turned out and can't wait to see how it all fills in over the course of the season.

After this experience, I don't think I will ever pay for a perennial plant again! Once my new garden gets itself established, I will have even more plants to swap with other gardeners. Trading with neighbours is a great way to get started, but to expand your plant horizons even further, I recommend trying the approach I used of putting a swap ad on Kijiji or Craigslist. If you have a lot of plants to trade, you could even organize a neighbourhood plant swap. Another idea I've had recently is to leave a note for homeowners if you see a plant you like that is big enough for division, offering to swap with them if they're interested. I haven't tried this yet, but I may next year as I see lots of gorgeous perennials in neighbourhood gardens when I'm out walking the dog.

I'd love to hear about your experiences if you've had success "gardening for free", so please leave a comment and tell me all about it!
Posted by Karen McLaughlin at 11:35 AM