Food Waste Friday: I Really Fell Off the Wagon 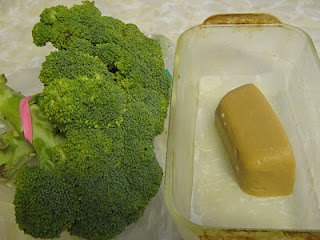 This was not a good week in food-waste land at my house. I ended up wasting an entire bunch of broccoli (which, although it doesn't look all that bad in the picture, trust me, you wouldn't want to eat it!) It had gotten buried at the back of the crisper and forgotten about. There have been a lot of good sales on veggies lately, and I was a bit over zealous in my purchasing, forgetting how many greens I had in my garden that were going to need using up (they're starting to bolt).

The second victim was a bit of honey-orange breakfast polenta, which was a recipe experiment of mine. I thought it was not too bad but no-one else in my family liked it, and after eating it for a few days myself I let the tail end linger in the fridge too long.

I also wasted a couple of handfuls of sweet cherries (not pictured) that started to spoil faster than I expected (maybe that's why they were on sale for so cheap!) I did manage to salvage most of the bag.

To see how others made out in the food waste department this week, head on over to The Frugal Girl.
Posted by Karen McLaughlin at 10:04 AM