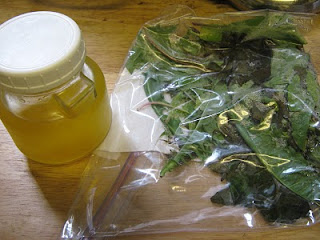 How embarrassing. After last week's extensive discussion of ways to use avocadoes over at The Frugal Girl, what was the first food victim of the week? Yup, nothing other than one of the little green fruits. It was lurking at the back of the crisper behind a lime and went unnoticed by me for quite a while. Unfortunately, by the time I found it there was no way to salvage it at all. This was the last avocado of a pack of 5 I'd bought for $2.50 (usually avocadoes are $1 to $1.29 each around here). They're on sale for that price again this week and I'm determined to make sure not a single one goes to waste this time!

I had a couple of other items that got wasted this week: a jar of canola oil that was left over from deep frying (it had started to grow something suspect in it) and some decomposing dandelion greens. While I'm not thrilled about wasting these, I know a lot of people don't reuse their frying oil in the first place, so in many cases it would have been discarded right away after its initial use. And the dandelion greens were foraged from my backyard, so not only were they free, they are something most people would have tossed in the compost bin rather than harvesting for consumption. At least the oil can go into my municipal Green Waste bin for composting (obviously the greens can as well), so nothing's going in the landfill.

Head on over to The Frugal Girl to see how others fared with their food waste this week.
Posted by Karen McLaughlin at 9:47 AM