The Tomatoes Are Here! 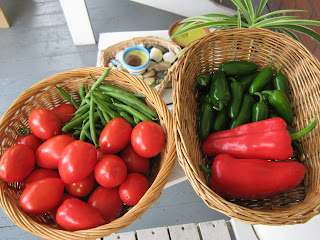 This week's garden harvest featured lots of red, ripe Roma tomatoes (21 of 'em, to be exact). I also picked 16 cherry tomatoes (not pictured),15 jalapeno peppers (with a whole bunch more on the way) and about half a pound of green beans. My first planting of green beans is almost done producing, and the second planting is just starting to flower, so I should see a steady green bean harvest for a while yet! I'm also thrilled to report that my sweet peppers TURNED RED!!! I've tried to grow red peppers for years, but they would never change colour for me. So I always ended up with a bunch of green peppers instead - not exactly a tragedy; they are my least favourite of the sweet peppers though, and I LOVE red ones! This year's peppers are really sweet red ones and the plants are producing well despite the fact that I planted them late. You can be sure I'll be growing this variety again next year - it's called "Gypsy" and I'm officially a big fan :)

Now that the days are getting shorter and cooler, it's time for me to plant some more greens. I'll be sowing spinach and lettuce in the next day or two and once I take out the bean plants from my first planting of green beans (probably by the end of the weekend), I'll start some arugula. I'm also going to start cutting some mint and drying it, so we can have mint tea all winter long.

What's going on in your garden right now?

This post is linked to $5 Dinners Square Foot Gardening
Posted by Karen McLaughlin at 1:04 PM