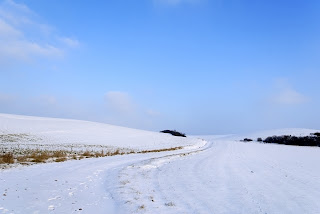 Back at the beginning of December, I issued a "Winter Walk Challenge" and invited my readers to join me in the goal of walking outdoors at least 30 minutes per day. I have trouble staying motivated to get out of the house during the colder months and this was my plan to get some fresh air and exercise daily while avoiding cabin fever! I meant to issue an update right at the beginning of January, so I'm a bit late getting to it, but on the "better late than never" theory, here it is.

I'm afraid I have to report that I had very limited success during my first month of the Challenge. On Day 1, it was raining, but I went out anyway, so I was proud of myself for that. The very next day, minutes before I was to embark on my walk, my older son fell and got a very impressive gash on his forehead that required stitches, so instead of a walk I got a trip to the doctor's office. The day after that, I was busy trying to catch up on all the stuff I didn't get done while I was at the doctor's the day before! For about a week after that, I was very consistent and got in a daily walk. After that, things fell apart, and to be honest, from about December 10th on is a giant blur and I got in the occasional walk here or there, but I know I didn't come anywhere close to walking every day.

I'd like to be able to say that once the new year rolled around, I got right back on track, but (ahem) it didn't quite work out that way. I did venture out on a New Year's Day walk, however, since then it's been hit-or-miss again. Today's a nice bright sunny day (albeit, minus 13 Celsius!!) so I am going to renew my resolve, get all bundled up, and get out there. I want to see if I can stick with it every day for the rest of the month. If this frigid weather keeps up, at least I won't have to worry about getting stuck walking in the rain.

One thing I *did* manage to do consistently was attend Bikram Yoga classes weekly. I've been going faithfully every Friday since the last week of November (and even went twice the week between Christmas and New Year's). Since I ride my bike there and back as well (about 5 km in each direction), I get a LOT of exercise on Fridays. I purchased a 20 class package through Groupon, and although the class is very challenging, I love it! In fact, I used the money I received as Christmas gifts to purchase more classes, and I plan to start going twice a week.

How about you? If you joined me on the Challenge, how have you made out so far? And if you haven't yet joined in, it's not too late. Hop aboard and we'll root each other on for the rest of the winter.
Posted by Karen McLaughlin at 10:04 AM