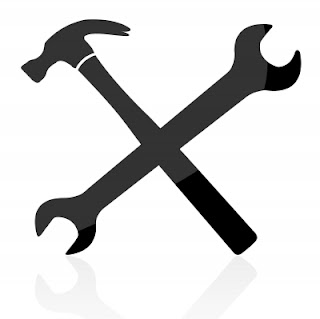 Photo by digitalart/FreeDigitalPhotos.net
Eight years ago, we were ambitious (or insane) enough to buy a 2 1/2 story, double brick house built in 1925. While structurally sound, the house was your basic cosmetic nightmare. The previous owners had lived here for 48 years and were in their eighties when they sold the place to us. We already lived in the area (just down the street, actually!) and knew that we wanted to stay in the area permanently as it's a fantastic neighbourhood (the first planned community in Canada, with just about everything you need within walking distance). This house had significantly more space than our previous 1 1/2 story home, with two features we'd always wanted: a large front porch and a usable attic space (which we claimed for our bedroom).

The price was definitely right, but in some ways I'm not sure we quite knew what we were getting ourselves into. We never would have bought a fixer-upper if we weren't prepared to do much of the needed work ourselves. Thankfully we'd gotten a good bit of experience fixing things up in our previous home; however this house definitely needed a LOT more help!

While we didn't waste any time starting to make improvements once we took possession of the house, we have lived with an unsightly front entrance since we moved in and are finally getting around to sprucing up this part of the house. 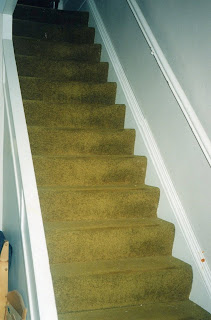 Mustard yellow carpeting on the stairs and in the front hallway, with hideous peeling linoleum in the area immediately inside the front door. When we ripped off the carpet, this is what the stairs looked like underneath: 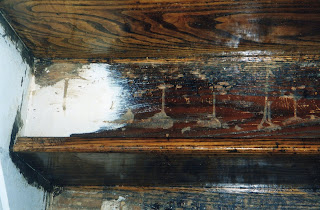 Niiiice!!!
My husband refinished the steps not long after we moved in, as well as ripping out a closet the previous owners had built in the entranceway that covered over one of the front door sidelights and took up way too much space while only holding about 3 or 4 coats. Thankfully the hardwood on the rest of the floors was in good condition after we scraped the disintegrated under padding off of it.

Before we could make any more significant improvements to this area, we wanted to install a banister on the stairs (the previous owners had ripped it out when they built the closet). This would allow us to remove the wall-mounted handrail, repair the plaster walls, and paint the whole area a much more attractive colour than its current purple-grey (ugh!) Unfortunately, the banister was by far the most expensive part of this project, and other things have taken priority for our financial resources up until now.

So, we had lived with it looking like this for the past several years: 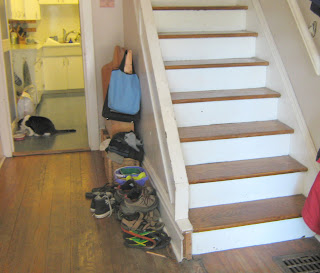 Which, while still a dramatic improvement from when we arrived, was not quite the vision we had (this area looks a whole lot better than the area over by where the closet was, but that will be a whole other post!)


Yesterday, we finally got ourselves a banister. We had been looking around at the Habitat for Humanity Restore and other similar places in town to see if we could find suitable used materials for this project, but ended up needing to purchase everything new (except the small pieces of wood used to make the post caps). We also decided to hire some help to make sure the banister was built properly. This is only the second time we've hired someone to do work on this house (the previous time was to redo the roof). We hired our neighbour who's a professional carpenter to help my husband build the banister and make sure everything got done right the first time around! He gave us a bit of a discount on his usual rate and was willing to have Joe work alongside him, reducing the total number of hours needed to complete the project. They started work at 8:30 in the morning, and by 3:30 we had this: 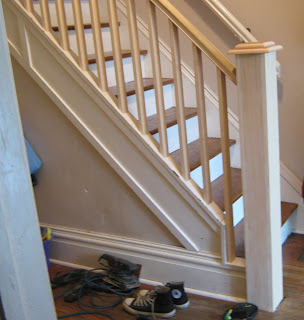 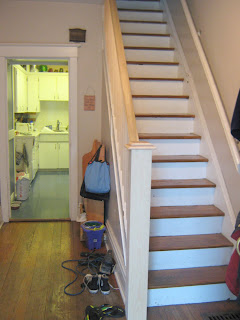 It still needs to be primed and painted, but it's there! It's incredible what a difference it makes to the feel of the whole entranceway Once the painting is done, we'll take down the handrail you can see running down the other side of the stairs and start working on repairing the walls in preparation for painting them.

The cost for this project was $245.67 for materials plus $175 for labour (which I believe was worth every penny - the whole thing went together smoothly and precisely because of our neighbour's expertise, and it's rock-solid). If Joe didn't have the woodworking skills to work alongside our neighbour, the labour costs would have been significantly higher.

We already have the primer and paint left over from other projects, so there shouldn't be any further costs to finish it off. That brings the grand total to $420.67. It's a fairly large chunk of money, but this banister will last as long as the house does, so we feel it was a worthwhile investment.

Next up for this area: wall repair and painting.


Anyone else out there renovating an old house on a small budget? I'd love to hear from you!
Posted by Karen McLaughlin at 12:48 PM