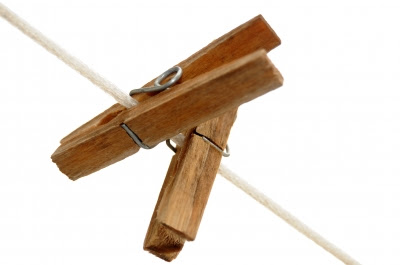 Image by Carlos Porto/freedigitalphotos.net
I first heard about soapnuts earlier this year and was fascinated - washing your laundry with the fruit of a tree sounded very natural and all, but I was concerned it wouldn't be an effective enough cleaning option for dealing with my stinky loads of boy-laundry washed in cold, hard water.

One of my friends knew I was interested in trying them out and gave me a small bag of soapnuts as part of my birthday present at the end of May. I started using them in June after my batch of homemade laundry detergent was used up, and after a good solid three months of use, I can officially say that I have been very pleased with the results!

My clothes are at least as clean as they were with the homemade detergent - probably cleaner. And the added bonus is that the soapnuts seem to have a fabric softening effect - I definitely notice a difference in the feel of our cotton T-shirts.

For those unfamiliar with soapnuts, they are kind of like a hard, sticky berry. They usually come with a little cotton bag, and you put 4-6 of them in the bag and throw it in the bottom of the washing machine when you start your load of laundry. The soapnuts contain saponins which are a natural surfactant that will clean your clothes. The same batch of soapnuts can be used for 3-4 loads, then most of the saponins are used up and you need to start with a new bunch (I suspect I've done up to 6 loads of laundry using the same batch, as I've been known to lose count of how many loads I've done with the current batch!)


After a bit of experimentation, this is my new laundry washing "formula":
-if using a fresh batch of soapnuts, soak them in boiling water for a few minutes before starting laundry (I do this because I wash in cold water, and I've heard this helps "activate" them so they will be effective in the cold water)

-for each load, use 4 soapnuts plus about 5 drops of lemon essential oil added to the little cotton bag with the soapnuts, plus about 1/4 cup of borax

That's it! I am really pleased with this method of doing laundry. The soapnuts are not only a 100% natural product, they are also a Fair Trade product, and when you're done with them they can be tossed right into your compost bin. They are also quite reasonably priced when purchased in bulk: the best price I have found so far from a Canadian source is at Grassroots - $25.99 for 1 kg, which will do over 200 loads of laundry and last me over a year. In the U.S., Mountain Rose Herbs seems to have very good prices (although I'm not sure what the current price is as they're out of stock right now and the price isn't listed).

(No, those are NOT affiliate links - I just really like soapnuts and these are two of the best places I know of to get them!)


Have you used soapnuts? If so, have you been pleased with the results? If not, have I convinced you to give them a try?
Posted by Karen McLaughlin at 11:53 AM