On Monday, we made our annual jaunt to Myers Apple Farm. We've been going there for what must be getting close to a decade now, and the fall season would just not be complete for our family without an apple picking adventure! We love this farm because they have a great selection of apples, as well as a small petting zoo, a corral full of horses and other goodies such as pumpkins and cut flowers. And I love it even more because they have not gone hyper-commercial like a lot of the other farms around here, which charge an admission fee and have a more carnival-like atmosphere. We're fortunate that although we live right smack in the middle of a dense urban area (a city of half a million) the apple farm is just a short 15-20 minute drive away.

Unfortunately, I had "camnesia" for our latest excursion (and apparently I was similarly afflicted last year, as I don't have any photos of that occasion, either). So I'll share a few photos from 2-3 years back (I cannot believe how much younger my kids looked back then!) 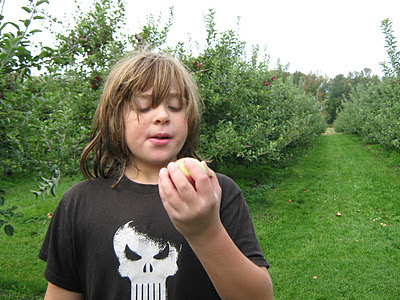 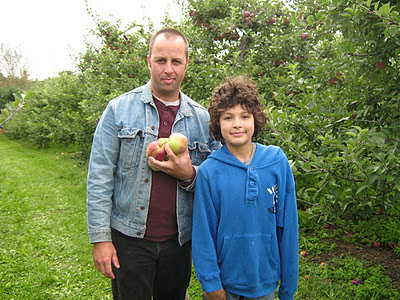 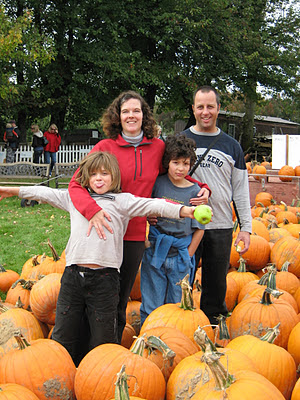 Family photo amongst the pumpkins, October 2008 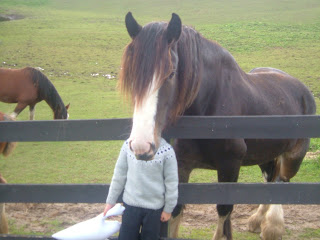 One of our classic family photos: Noah the Horse-Headed Boy
(this was *not* taken intentionally - the horse moved just as I snapped the shot, which makes it even funnier!)

And I just love this sign, posted at the entrance to the farm: 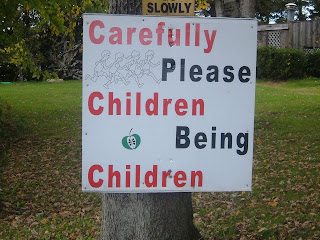 Empires are our favourite apple variety. I think they're the perfect mix of slightly tart with just the right sweetness, and they're nice and crisp. Last year, much to our disappointment, the farm had a severe shortage of Empires, as they were hit with a May frost just when the buds were forming. We got the last half bushel of apples they had last year and weren't actually able to pick any apples because there weren't any left on the trees. This year, happily, there was a bumper crop of Empires and we were able to pick a full bushel, despite the fact that we went up a couple weeks later than we usually do.

Newly fortified with our bushel of fresh-off-the-tree Empires, we'll have a good supply to make all my favourite apple dishes! I've shared a couple previously here on the blog:

And there are a bunch more in my upcoming book, Cheap Appetit (which really will be coming out sometime soon - there have been quite a few delays, but it will definitely be available well before Christmas!)