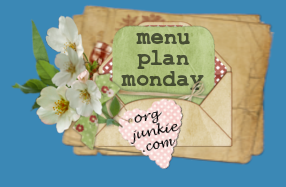 BOOK UPDATE: My book, Cheap Appétit : The Complete Guide to Feeding Your Family for Less Than $400 a Month (While Eating Better Than You Ever Thought Possible) has finally gone to press. I still don't have an exact date when it will be available for purchase,  so stay tuned - you'll know as soon as I do! I've started putting page references to recipes that are in the book in my menu plans so you'll know where to find them once it's released :) For more details about the book, go here.

Thursday: Leftover Buffet for kids (hubby and I out at his work Christmas party)

For more great meal ideas, check out Menu Plan Monday at orgjunkie.com
Posted by Karen McLaughlin at 9:35 AM