While the May long weekend may be the official kickoff to summer for many, for me it's the annual strawberry picking and jam making extravaganza that signals the start of the season.

I've been making strawberry jam for over a quarter of a century now, so it's a firmly entrenched tradition in our household. A few years ago I was cleaning out my stash of Mason jars and found one labelled "July 1985" in my teenage-girl handwriting - I would have been 14 that year. Yep, I've been jamming for a long time! My husband and I have been making strawberry jam on Canada Day (July 1st) since our kids were in diapers, but strawberry season has arrived earlier these past few years, and we'd been hitting the tail end of the season instead of the peak. In fact, this year the season started so early I think the pick-your-own farms will be done by then!

My hubby and 14 year old son went and picked 18 quarts of berries last Wednesday at Lindley's Farm. We ate a lot of them fresh, used some to make the topping for our Father's Day cheesecake, and froze a few, but a substantial amount of them were devoted to jam production. Between Wednesday afternoon and Thursday evening, I managed to turn this: 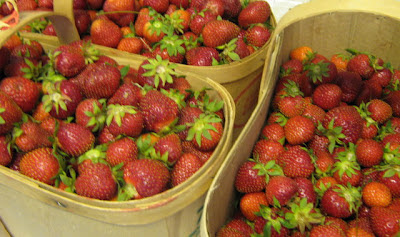 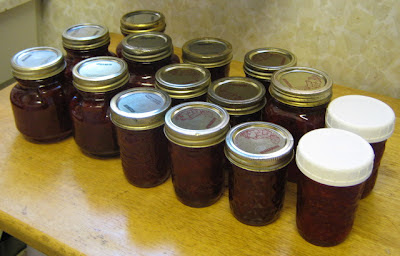 While it's satisfying to see all those jars neatly filled and lined up, for me, making jam is about much more than the final product. It's a ritual that connects me to my childhood, my community and my values. My mother wasn't particularly domestically-minded, but she did make strawberry jam each year in my younger years and I remember going to the local strawberry fields to pick with her each June. Unfortunately, those fields now hold a housing development instead of fresh, local fruit. Supporting local farmers is important to me, and going to pick the berries at a local farm is an important piece of this tradition (and you can't beat the smell of a strawberry field on a warm June day!) The local strawberry farms, like the one I used to pick at as a kid, have disappeared at an alarming rate in my lifetime and I want to help make sure the ones that are still in existence continue to thrive. The decline in local farms is particularly saddening because our local berries are absolutely exquisite; they are so sweet and juicy they're almost like candy. You just won't find anything like them in those imported boxes at the grocery store (in fact, the taste is so different it's hard to believe they're even the same fruit). I also think it's pretty cool that many of the Mason jars I pack that jam into have been with me for a good decade or two (and some of them have been with me since that first jamming session of mine 27 summers ago). Most importantly, my kids know where the best food comes from: fresh, locally grown edibles lovingly prepared in your own kitchen.

It just occurred to me that my older son is now the same age that I was all those summers ago when I made jam by myself for the first time. Perhaps it's time for him to whip up a batch of his own.


What have you been doing with YOUR fresh, local berries?


Love what you read here? Find out how you can help support this blog.