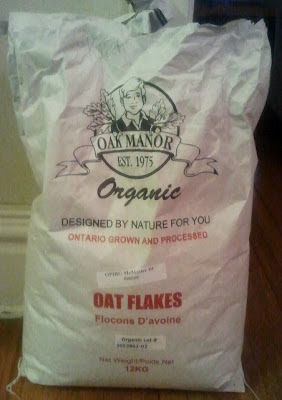 As most of my regular readers will be aware, about six months ago (when my book launched) I issued myself a "Local and Organic Challenge", to see how much local and organic food we could include in our $400-a-month food budget (that's for a family of four, which by the end of the month will include two teenage boys, both of whom have voracious appetites).

As it turns out, we've had quite a bumpy ride in many respects these past few months, but even so, we've made quite a lot of progress with the Challenge.

Looking at foods by category, here's a rough update of where we are now:

Grains: We have organic (and locally grown) oats and cornmeal, organic quinoa, millet and popcorn. All of these are from an Ontario supplier (Oak Manor) who purchases from Ontario growers when possible, although it's not guaranteed that the products are locally grown. We purchase all of these items through the Ontario Natural Food Co-op. When purchased in bulk, the prices are comparable to conventionally grown items from the grocery store. I've also bought Que Pasa organic tortilla chips when they go on sale for a treat (they are actually less expensive than the national brand conventionally-grown tortilla chips).

Meats and Alternatives: We've now started buying the majority of our meat from VG Meats. They raise their meat using sustainable practices (animals are pastured, etc). In June, we purchased an 80 pound freezer order (mixture of beef, pork and chicken) for a fantastic price (more details here). We do need to make a special trip to get to their store as it's fairly far from our usual stomping grounds, but since we are buying in bulk we will only need to go there about three times a year or so. We've been buying Oak Manor organic seeds (sunflower, pumpkin and sesame) through ONFC, and the bulk pumpkin seeds are actually cheaper than conventionally grown ones from our local bulk food store. We have also bought some organic white beans through ONFC (although I wasn't thrilled to see they were from China, as there are plenty of bean growers here in Ontario.)

Dairy and Eggs: All of our dairy products are Canadian, and some brands are Ontario-produced - I'm doing my best to buy those ones when they're on sale! I have been buying Organic Meadow milk (Ontario produced) to make yogurt most of the time since I started the challenge. Most of the eggs sold around here are locally produced (the organic ones are definitely out of my price range right now - I'm hoping my city will decide we're allowed to keep backyard chickens sometime soon!)

Fruits and Vegetables: Between my backyard garden, my produce coop, and all the locally grown goodies in the stores during the growing season, it's been pretty easy to include a lot of locally-grown produce over the last few months. We've eaten local lettuces, Swiss Chard, green onions, spinach, strawberries, rhubarb, peaches, raspberries, saskatoons, corn, cantaloupe, zucchini, sweet peppers, broccoli, hot peppers, tomatoes, carrots, potatoes, onions and herbs. Local pears and apples will be coming into season now and we'll likely be heading to a pick-your-own apple farm soon. A lot of local crops were damaged this spring due to a late frost, and others were hit by drought this summer, so unfortunately there is less availability of local produce this year than normal (There were no local cherries this year, and I'm not sure how well the farm fared where we usually pick apples; two years ago they lost 60% of their Empire crop, which is our favourite apple). I've been buying organic bananas most of the time as they only cost about 25% more than conventionally grown ones at my neighbourhood grocery store. I've also been buying organic unsulphured raisins and organic coconut through ONFC (buying them in large quantities has helped keep the unit cost down).

Oils: I've been buying Spectrum organic coconut oil (great for popping popcorn!) which is a good price at a nearby grocery store, and organic canola oil through ONFC.

Our average grocery bill during this time has been just a hair under $440 dollars. Yes, it's a bit above my $400 goal, however, the growing season months are where we typically have higher grocery bills anyway, as we're stockpiling (canning and freezing) lots of seasonal produce. Right now I have plenty of sweet peppers and zucchini tucked away in my freezer, as well as some local berries. I also have 10 litres of salsa (made with local tomatoes, sweet peppers and jalapenos) and a bunch of pickles and zucchini relish canned as well.

Overall, I'm pretty impressed with where we are at so far, especially considering our grocery bill is half the average for a family of four here in Ontario. I'm not sure how many more changes we'll be able to make in the next six months. My boys are both eating like crazy these days so it's been a challenge to keep our food budget on track while still making sure they're getting enough to eat. Of course, I'm always keeping an eye out for new food sources, so there's always the possibility we will track down some great new food deals in the coming months. There is also a local cooperative grocery store in the works right now, and that should be another great option once it comes into being (although it's probably still a little ways off from becoming a reality - I'll know more soon as I'm planning to get involved as a volunteer in helping it get off the ground!).

Reminder for local readers: If you're reading this in your email or news feed, I wanted to make sure all my local readers know about my upcoming book signing and presentation. It's on Wednesday, September 12th at 7 p.m., at the Westdale branch of the Hamilton Public Library. I'll have copies of my book available to purchase for $15. I hope some of you will be able to join me!