I believe I've mentioned that life's been crazier than usual around here at least once or twice :) A sure sign that things have gotten a bit out of hand is that the fall and winter clothes shopping trip that we normally do around the end of August (hitting up a Value Village 50% off day) just happened on Saturday. Yup, *after* Thanksgiving! Hey, at least we got it done before Halloween.

Since there wasn't another 50% off day on the Value Village horizon for the foreseeable future, we decided to head over to Talize since fellow Hamilton blogger Jentine of My Edit is a huge fan (and far more fashion conscious than I've ever going to be). I'd been there way back when they first opened (I think that's getting close to a decade ago as I seem to remember my kids being quite small). Anyway, for whatever reason we'd never gone back (it's a bit more out of the way for us than Value Village so it mostly fell off my radar I think). I'm happy to report that we had a very successful trip and I'm now an official Talize convert :) Overall I found the selection better organized, with more higher quality items and a lot less stuff that looked like it was ready for my rag bag compared to Value Village. As it turned out, they were offering 50% off on clothes with pink and purple tags, and about half the items we selected fit this category, so we did still receive a significant discount on our purchase.

We did also make a quick trip over to Value Village as they have a much larger shoe selection than Talize and we'd struck out in that department. We made a couple of good finds there, then hauled the whole lot home to be photographed and laundered.

(My apologies for the less-than-stellar photos. By the time we got home, daylight was starting to fade, and I really wanted to get this stuff in the wash as I had two teenage boys pestering me for their new duds. I did the best I could with the light I had to work with!)

Teenage boy #1 (13 year old) ended up with the following: 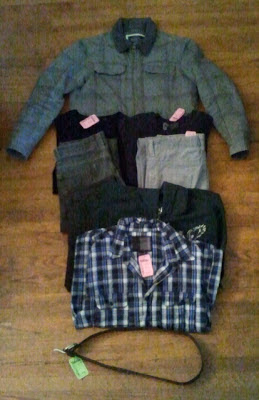 - A new winter jacket (I'm SO relieved we found something he agreed that he would actually wear!! He's definitely the most style-conscious person in our household).
- 3 pairs of jeans (again, nearly a miracle considering how picky he is about fit). One of them is actually not black since we found a gray pair that met with his approval (I'm not sure why, but he won't wear blue denim)
-2 black T-shirts
-2 American Eagle hoodies (only one in the picture as he was already wearing the other one!)
-plaid button-down shirt
-black belt 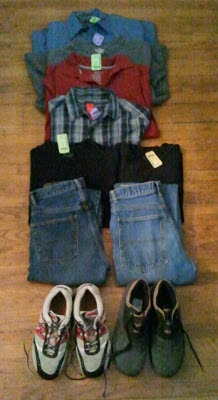 Plus I found a couple of items for myself: 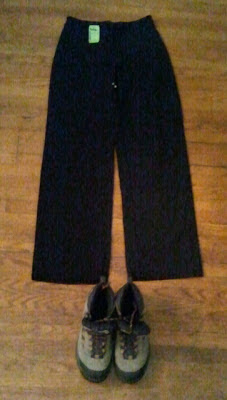 The boots I'd picked up in hopes they'd fit my 13 year old. They *were* in the men's section. After he tried them on and reported they were too small, it occurred to me that the style was not all that different from that of my favourite boots that died last year. I tried them on and they fit me! So, even though they're technically men's boots, I don't really care :) I don't love them as much as my old expensive pair, but at $14.99 and in brand-new condition, they'll get me through until I can splurge on another really good pair again (which isn't likely to be this year).

That brings our total spent on clothing so far this year up to $344.47. Over a third of that was on shoes and boots since my boys' feet just keep getting bigger! I'm hoping their feet are just about done growing as one of them already has larger feet than my husband and the other's are about the same size.

I think we're now just about covered for fall and winter clothes. We still need to find some winter boots for my 13 year old, and hubby needs a new pair of dress shoes. We also need to stock up on socks for the boys. I'm hoping that should be it until the end of the year! It looks like we'll come in a lot lower on our clothing expenses than we did last year, when we went about $150 over our typical $400 annual budget.


Have you found any great thrift-store deals lately?
Posted by Karen McLaughlin at 8:00 AM