Having Patience Pays Off 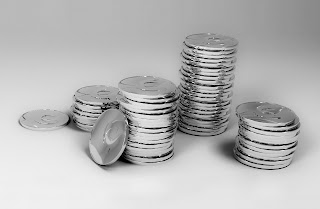 Photo: Salvatore Vuono/FreeDigitalPhotos.net
One of the biggest keys to saving money is being able to wait as long as possible before you buy something. Predicting future needs and planning accordingly is an important skill for all frugalistas to develop! This way you have plenty of time to check out a variety of secondhand sources for the items you need, or to wait for a really great sale if it's something you absolutely have to buy new.

The ability to hold off on purchasing "wants" (things that might be nice to have, but are not essential to daily living) may be the biggest way in which patience ends up paying off. Since so many purchases are "impulse buys", there's a good chance you could end up deciding you didn't really want the item in question after all. If you hold off on the purchase and still decide you really want it, you may end up finding a very low cost or even free way to obtain the desired item.

A perfect illustration of this occurred at our house recently. My hubby and I had been discussing how it might be nice for us to have a second TV. We had one in the "games room" where our boys spend a lot of time hanging out with their friends. Since we don't have cable, this TV is used primarily for gaming and watching DVDs (we do get a couple of channels with rabbit ear reception and occasionally will watch broadcast TV). Often, we would want to watch a movie at the same time as the kids wanted to hang out with their friends and play games on their Playstation 3 (purchased with their own money). One of the nice features of the PS3 is that it will play DVDs and Bluerays in addition to the PS3 games. Since we already had a DVD player before the kids bought the gaming system, this meant that if we had another TV, we'd be able to use it with our original DVD player and give us adults the freedom to watch movies anytime we wanted without having to break up the kids' fun and games.

Although my husband and I agreed that a second TV would be a "really nice to have" extra, at this point in time, we were unwilling to go out and buy a TV (even secondhand) as there are several other items on our priority list to which all extra funds are currently being directed. I decided to keep an eye out on Kijiji and Freecycle for any free TV offerings that might come along. After just a couple weeks, I found one on Kijiji that was being offered by a household very close by (a 5 minute drive). They were thrilled to find someone to take it and avoid taking it to the dump, and we were thrilled to receive it. It was in just as good of condition as the TV set we'd purchased a few years ago, and was actually a larger screen than we already had. We decided to give the boys the larger one and take our original one to use up in our attic bedroom for movie watching.

Now all we needed was a nice TV stand on casters to hold our "new" set and the DVD player. Hubby had already been devising a plan to build us a stand out of scrap wood and hardware that he had lying around, but since he's got a few DIY projects on the go, he hadn't bothered starting to put anything together yet. This ended up being a good thing, as less than a week after we found our free TV, he trash-picked a TV stand that was exactly what we had in mind! All it needed was a good wiping down and it was ready to go. The only purchase we ended up making was one of those little connector doodads (highly technical term, I know!) to connect the wires for the DVD player to the TV. This cost us just under twelve dollars at a local surplus store.

In contrast, if we'd gone out and bought a new TV and stand the minute we'd decided we wanted one, we'd have paid around $200 for the TV and $79-$99 for a similar type of stand. With taxes, that would have put the total cost at over $300. I like $12 a whole lot better. Not to mention the fact that if we were going to buy it new, we would have chosen just to go without at this time, because we had higher-priority items to save our money for. With a little patience, we were able to find an extremely low-cost solution to get what we wanted!

How has patience paid off for you lately?
Posted by Karen McLaughlin at 11:22 AM