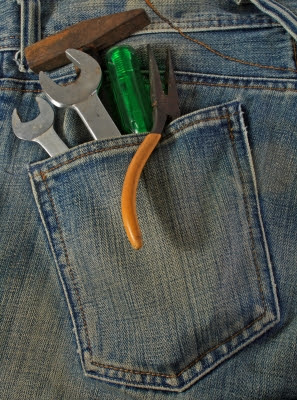 There are so many ways that the internet has made life easier: money management (paying bills, budgeting, banking), staying in touch with far-flung friends (Skype and Facebook), crafts and home management (blog tutorials and guides) and reserving library materials are just a few that come to mind!

One of the things I am increasingly grateful for is what I've come to think of as my "internet repairman". My dh is a pretty handy guy, but occasionally things come up that he doesn't know how to deal with right off the top of his head. In the last year or so, there are two particular occasions where finding help on the internet saved us a significant amount of cash:

1. A holiday plumbing problem: On Christmas Day of 2011, we had a severely backed up toilet (yes, really, Christmas Day, at about 10:30 p.m. when we were all exhausted!) As this is our only toilet, it constituted somewhat of an emergency. My hubby ended up having to "pull" it (remove the toilet completely) to remove the blockage. He's done that part before, but after he got everything all put back together there was water leaking from around the shutoff valve (this is an old house, so the shutoff valve is fairly ancient). The leak was significant enough that we couldn't just leave it until normal business hours returned on December 27th. We shut off the water overnight and dealt with it the next morning. By Googling "leaky water shutoff valve" I was able to find a great article on the Family Handyman site which explained exactly how to fix this problem. It ended up being a 5 minute fix and saved us from calling a plumber on Boxing Day (I don't even want to think about how much plumbers probably charge on statutory holidays).

2. A stove that wouldn't heat up: We had noticed that our gas stove was taking longer and longer to heat up, and one day it finally ceased to heat at all. Once again, Google to the rescue! By searching "gas oven won't heat up" I easily discovered the problem was a part called, quite unsurprisingly, the igniter. Initially I figured we'd have to call in a repairman for this one, as tinkering around with gas appliances sounds a bit on the dangerous side. But I thought I might as well see what I could find on the Internet first. As it turns out, there are several helpful YouTube videos explaining how to replace the igniter in your gas stove - one of them featured a stove that was virtually identical to ours! Watching the video demonstration, it was obvious that this was a job that was well within Joe's skill set (heck, it looked easy enough that I think *I* could have done it!) Thankfully, we have a great appliance-parts store in our city, so we purchased the needed part and Joe installed it in just a few minutes, watching the YouTube video on his phone as he went along. It was a fairly expensive part (about $90), but calling in a repairman to diagnose the problem and do the installation would undoubtedly have been much more expensive!

It's not ALWAYS possible to fix things yourself, but with the amazing resources available on the internet these days, it's much more likely than you might think that you can do a needed repair without calling in an "expert".

Have you ever repaired a major appliance, or solved a plumbing, electrical, or other "technical" household problem using the wealth of resources on the internet?

DID YOU KNOW? I now have an events page! Come find out where you can catch up with me at a signing, seminar, workshop or food demo HERE.