Since we got back from our camping trip just under a month ago, we've been working away on a bunch of household projects that have been on our "to-do" list for what seems like forever. I shared a progress report on our front entranceway makeover a couple of weeks ago. Since then we've turned our attention to our backyard, as there is some major work we want to get done there before the warm weather departs for the year!

We actually began in late spring by sprucing up this area alongside our patio, which could best be described as an eyesore: 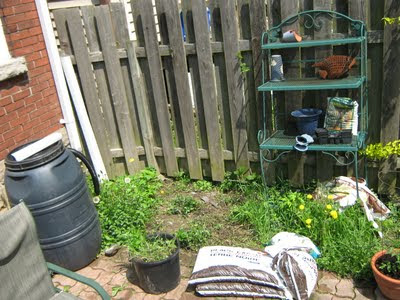 That's our brand-new-this-year (and not yet installed) rain barrel lurking over in the left hand corner. Since I'm forever conspiring to find a few more inches of sunny garden space to grow more veggies, I asked my handyman hubby to build a raised bed in this long-neglected space.
Here's what it looks like now: 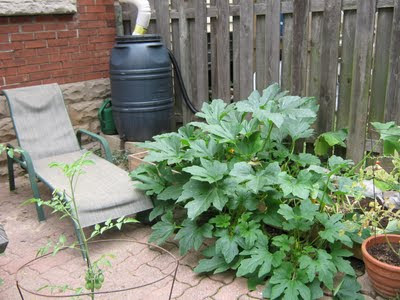 My killer zucchini plant is currently dominating the space! I transplanted my strawberry plants from another section of the garden to this raised bed (they're on the far side of the zucchini, closer to the rain barrel). I'm planning to plant some taller sun loving perennials around the base of the rain barrel next spring to brighten up that area a bit (hopefully I'll be able to swap plants with some of my neighbours). It definitely looks a lot nicer than when we started!
The rain barrel cost us $50 and other than a couple bags of soil and compost for the raised bed, I don't think we purchased anything else (the wood for the raised bed was all pieces we had lying around from other projects). So, the total for this part of the yard was under $60.
For the last couple of weeks, our attention has been focused on the back third of our yard, which has been in a really sad state for the entire time we've lived here. Joe had built a playhouse structure for the boys the spring after we moved here, so that's been up for the last seven years. The kids, along with their neighbourhood friends, got a ton of use out of the playhouse over the years, but its time has now passed.  My much larger, about-to-turn-12-and-14-this-fall-and-too-sophisticated-for-a-playhouse boys, are ready to move on. So we decided to tear down the structure and build a patio in the corner where it stood. This is a nice shady corner of the yard, so the patio will be comfortable at just about any time of the day, as opposed to the slice of patio over by the raised bed, which is inferno-like by 10 a.m. most days in the summer. 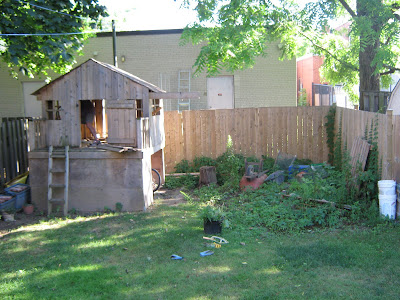 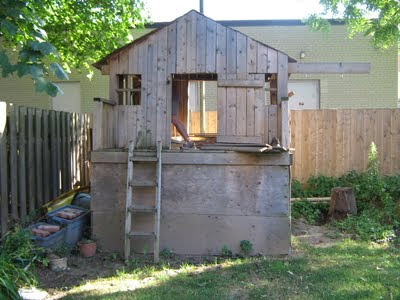 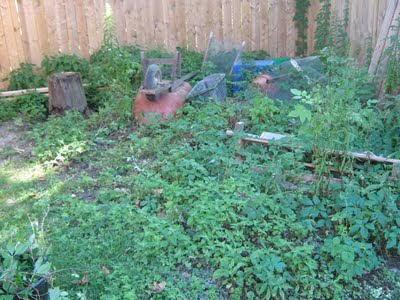 This ginormous weed-and-junk pile is where a decrepit garage once stood. It was well on its way to falling over when we bought the place, and we tore it down soon after we got here. Unfortunately, we haven't gotten around to dealing with this increasingly alarming-looking corner until now. We also needed to remove the tree stump you can see in the back left corner before implementing our current yard transformation plans. 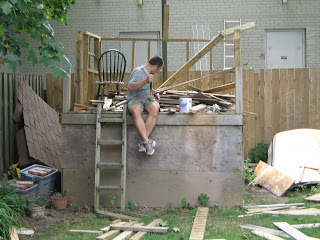 The playhouse, halfway down
Here's what things look like after hauling a lot of wood and weeds out of the area: 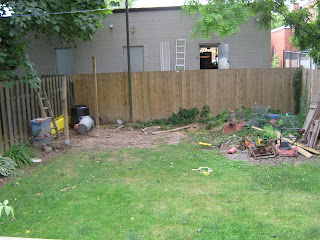 Oh, and note the absence of the stump! It was located roughly in the middle of this photo. Joe was planning to rent a chainsaw and take it out himself. As luck would have it, our next door neighbour hired a guy to come remove some dead branches from one of his trees. When we saw him out there chainsawing away, we decided to ask him how much he'd charge us to remove the stump. He was asking only $40 which was an incredible bargain, since he hauled the thing away, too! Those last two corner posts are now down and we're waiting on the call-before-you-dig people to come out and make sure we're not going to hit anything important when we excavate the area for the patio. The brick we'll be using for the patio was all gathered for free from several sources. For the last couple of years, we've been seeking out the same interlocking brick that was used for the patio area and walkway we already have in the backyard and have finally amassed enough to proceed with the 10-by-12 foot patio we have planned. Once the patio is built, Joe will built a shed to the right of it, using much of the wood from the playhouse.

We hope to make some significant progress on this project in the next couple of weeks, so stay tuned for the next update!
Posted by Karen McLaughlin at 12:22 PM