I mentioned earlier this month that our big goal for this year was to focus on long-overdo home improvement projects. We haven't wasted any time getting started on this goal, and we've been diligently working away at the next stage of our front entranceway makeover since a few days before 2012 even arrived!

For the last three weeks or so, our lives have been filled with taping, plastering, sanding and painting - and I am SO thrilled about how it's coming together. It's looking even better than I'd hoped. I just can't wait to do the final "unveiling" of the finished reno - but unfortunately, we're not quite ready for that yet!

Since I just have to share *something*, I figured I might as well post some of the "before" and "during" pictures and hopefully you'll be as eager to see the "after" pictures as I am to share them.

If you missed part 1 of this series, you might want to go take a peek to see how things looked when we started out.

Brace yourself, some of these photos are pretty scary :)

This first one actually doesn't look *too* bad, but I'm sure you'll appreciate the difference in the "after" photos! 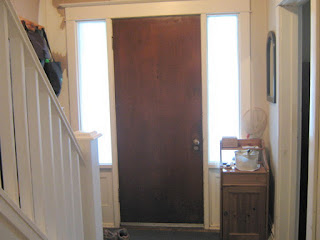 This next picture is just to the side of the front door: 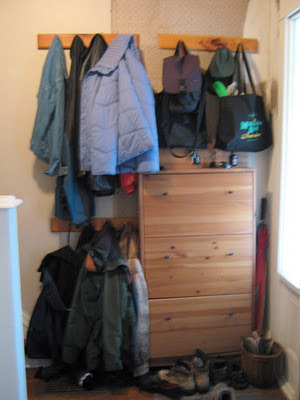 Here's what that area looked like once we moved all the "stuff" out of the way (YIKES!!): 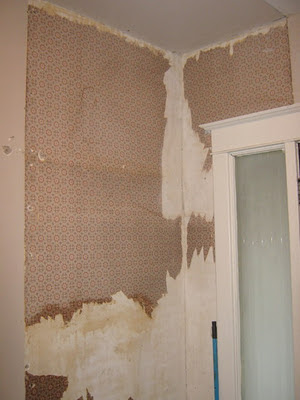 When we moved into the house, there was a closet in the area where all the (horrible) wallpaper is. It was not original to the house; the previous owners had built it in and it was just a VERY BAD IDEA. The closet took up a huge amount of the entranceway, covered over one of the door sidelights, and was so poorly designed that it was only big enough to hold a few coats despite the amount of space it took up. Not to mention the fact that they also ripped out the original banister on the stairs to make room for this monstrosity (replacing the banister was part 1 of this reno). My husband whipped out his crowbar and ripped that sucker out so fast I don't even have a "before" picture of it :)
Frighteningly enough, this isn't even anywhere close to the most hideous wallpaper in the house: 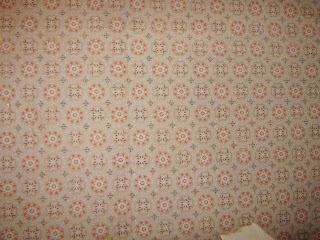 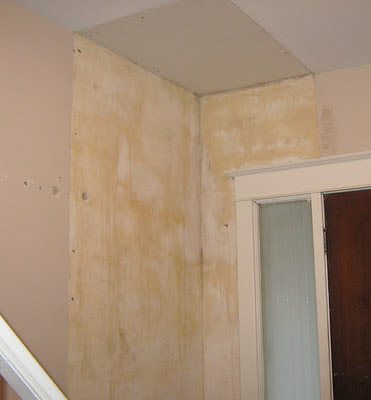 Once we tore down the closet, we were also left with this attractive hole in the ceiling: 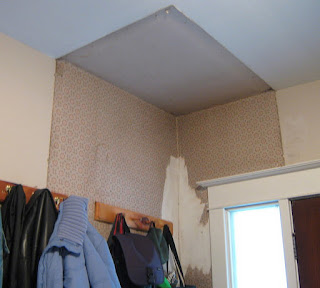 Thank goodness my husband got some good practice taping and plastering when we fixed up our side entrance because he sure had to do a lot of it during the course of this reno.
Goodbye, hole in ceiling: 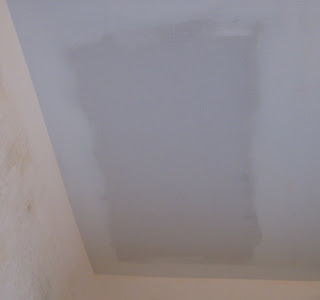 A few corners also needed taping and plastering, plus there were plenty of other places in our old plaster walls that needed repairing: 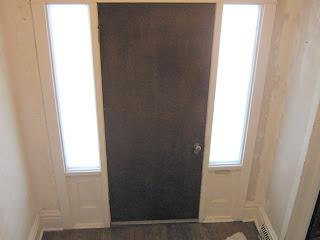 The hideous grey-purple you see in this next photo is the colour we've been living with on the walls since we moved in - ugh!!! It actually looks worse in real life than it does in the picture :) 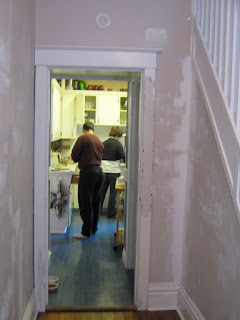 Looking at these pictures now, I think I've already forgotten just how terrible this area used to look and I can't believe how transformed it is! We've got the walls and ceiling all painted now, but are still working on the baseboards and door frames. We also have one more big project to complete before this reno is finished - a built-in coat locker on the wall where the shoe cabinet and coat hooks used to be. That might still be a couple weeks away from getting done, as we need to wait for our carpenter neighbour to be available to help my husband with that piece. I'm hoping to be able to show at least *some* of the after pics next week, so stay tuned!
Posted by Karen McLaughlin at 11:35 AM