In a society where products seem largely designed to break down less than a year after purchase, it's increasingly rare to have a long-standing relationship with most of your "stuff".

That makes it doubly heartrending that I need to say goodbye to not one, but two of my hardest working and long lasting possessions: 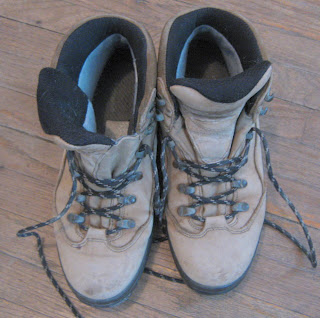 I'm sure that at least one of my kids was still in diapers when I bought these boots. The youngest is now 12, so I'd say these boots are somewhere between 10 and 12 years old. They are perfectly broken in, and have carried me in comfort through countless kilometres of tromping through the woods and trudging through the city streets running errands on foot. Unfortunately, they have suffered a fatal injury that my local shoe repair guy deemed unfixable. I know they look fine from the top - it's the heel and sole of one of them that's wrecked. You can't tell from a quick look at it, as my husband rubber cemented it back together after the shoe repair guy handed down the death sentence in an attempt to make them barely functional until I can find a replacement pair.

I'm really going to miss these boots. I knew they probably didn't have too much life left in them, but I thought I was going to get 1-2 seasons more out of them, otherwise I would have started searching for a new pair much sooner. It's going to be hard to replace these old friends! 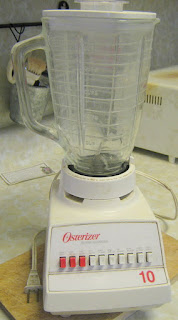 This humble machine has lasted us nearly 20 years, withstanding all manner of abuse by both of my smoothie-obsessed kids, not to mention the many batches of soup it's pureed in the last 2 decades. I remember buying this blender with my husband when we first moved in together during our college/university days, paying for it entirely with Canadian Tire Money we'd stashed away (for all you non-Canadians, Canadian Tire is a national hardware store chain, and they give you a percentage of each purchase back in Canadian Tire "money", which you can then use to buy whatever you'd like!). Amazingly, it's not the motor that's shot - it's the glass carafe, which has several chinks out of it, plus it's not sealing properly and liquids are leaking out the bottom. We've replaced a couple of different parts over the years to extend its lifespan, but at this point I think the motor's days are numbered and it's really not worth it to replace all the other parts that need replacing.
Of course, I'm even more bummed that both of these hard working objects decided to call it kaput during our No-Spend Month. In fact, remembering the crazy week we had during our last No-Spend Month back in October, I'm beginning to wonder at the wisdom of declaring No-Spend Months! I think I'm probably just more acutely aware of extra, unexpected expenses during these months, as I'm sure they happen during the rest of the year, too.

I may not end up replacing either the boots or the blender until my No-Spend month is over, unless I find a fabulous deal on a suitable replacement before then.


In an age of planned obsolescence,  I honour both of these items for serving me so long and so well.

Farewell, friends! May I find worthy successors for both of you.
Posted by Karen McLaughlin at 8:10 AM