When I shared the latest update on our front entranceway makeover a couple of weeks ago, I promised some pictures of our new built-in storage unit once it was all finished.

Well, after a full day of my husband and our carpenter neighbour building and installing it, plus a few afternoons of work on priming and painting it, I finally have a photo of the final product to show you! But before I do, I'll just remind you what this space looked like before: 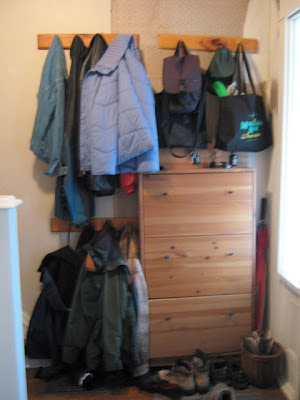 And here is what it looked like after we cleared everything out to repair the wall and ceiling and paint: 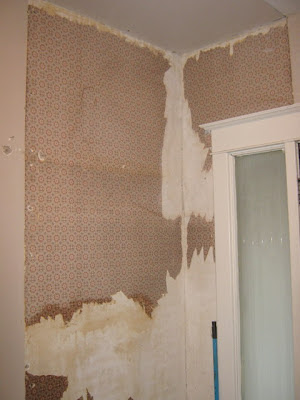 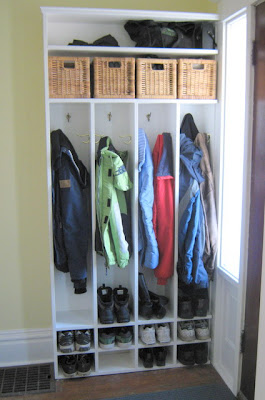 Just a slight improvement, don't you think? What I love about this design is that not only does it appear much cleaner and less cluttered, there is actually more storage space than there was with our previous setup. We now have space for 12 pairs of shoes and boots, compared to 9 pairs previously. We also have room for more coats, plus attractive storage for our hats and gloves in the baskets above the coats. The top shelf holds umbrellas, shopping bags and other similar items that are handy to have by the door.

I'm really pleased with how much storage we've managed to get in such a tight space, without overwhelming the entranceway area at all. This unit actually holds much more than the horrible closet we ripped out, while taking up much less space.

We have finally managed to take our front entranceway from a majorly embarrassing eyesore to one of my favourite spaces in the house. I can finally open the front door and feel good about what people see when they step inside!

While I do love our new look, it sure took a lot more time and money to get it to where it is than we originally anticipated (other owners of old fixer uppers will not be shocked by this at all, I'm sure!). Still, we spent a lot less than many other people would have to get the same result, since we did most of the work ourselves.


A final cost breakdown of the different stages:

Stage 1: The Great Rip-Out and Refinish 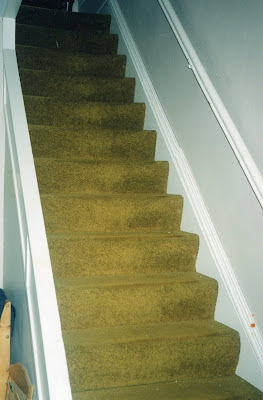 This was the part we did shortly after we moved into this house, so nearly 9 years ago. We ripped out the closet and old carpet on the stairs and upper and lower hallways. Hubby then refinished the stairs and we cleaned up the hardwood floors under the hallway carpets.

This stage was mostly elbow grease and time and didn't cost much at all. As it was several years ago, I don't remember the exact cost, but it was basically wood stain, varnish and paint, some of which we probably already had on hand at the time. I'd say we didn't spend more than $50 for this stage. 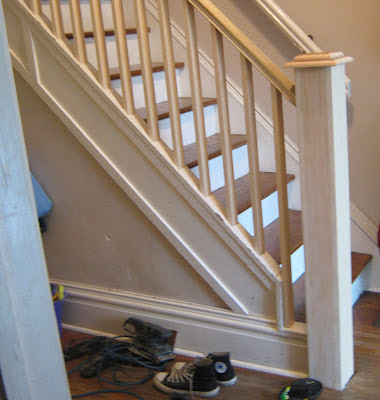 This stage was documented here and cost $420

This final stage ended up costing us more than we anticipated, but when I think about how much we would have to have paid someone else to do all the taping, plastering and sanding that my husband did to repair the walls and ceiling (I'm guessing several hundred dollars) I guess we still ended up doing okay!

If you missed my last update, you can see all the other "after" pictures here.

Expenses for this stage:


Paint: $306.93
We ended up buying a lot of paint! 1 can of ceiling paint, 2 cans of primer, 2 cans of Weston Flax (the wall colour) and a can of high gloss enamel that I used to painted the table. I'll use the enamel paint on a few other pieces of furniture, and we still have enough primer left to (hopefully) get through most of the doors on the second floor (there are *seven* if you can believe it - bathroom, 3 bedrooms, 2 closets, plus the door to our third floor attic bedroom!) We got a 20% discount on the paint for buying 5 gallons or more at a time. The staff kindly told us that if we kept the receipt, we could get the discount if we came in later to buy another gallon or two.

Storage Unit: $335
We spent $135 on materials, and $200 on labour to hire our carpenter neighbour to help my hubby build this. It was worth it as it ended up being a more fiddly project than it looks at first glance. They cut out the back to fit around our antique baseboard, which we did not want to rip out, plus there were a few other challenges involved. The paint we used for this is included in the paint costs above. The storage baskets we have had for several years, and we build the shelf to fit them.


Miscellaneous building supplies: $91.40
This includes stuff like the plastic we sealed off the doorways with during sanding, drywall compound, spray paint, a piece of drywall for the ceiling, and a couple small pieces of equipment we'll be able to reuse for another project.

Accessories: $25 max (estimated)
As I documented in my last update, all the finishing touches such as the mirror, table, baskets, etc. were secondhand finds I've collected over the years and I'm sure I didn't spend more than $25 on these items.


That brings the grand total to just a hair under $1230.
It's certainly not an insignificant amount of money, but as I already mentioned, if we had paid someone else to do all the things we've done ourselves, it would have cost several times more! If you're going to be fixing up a house, it really pays off to learn as many skills as you can. My husband had never taped and plastered corners before we fixed up our side entrance. He got a lot of good practice with that project, and felt much more confident about his skills in that area by the time we tackled the front entranceway. Because he has some pretty solid carpentry skills, he was able to work alongside our professionally trained neighbour to help build the banister and storage unit. This meant that the projects were completed in less than half the time they would have been if our neighbour had been working alone, so we paid a lot less in labour costs and still got professional quality work done.

We also did this makeover in several stages as we had the money available, meaning we didn't lay out all the cash at once. When we moved in, we didn't think it would take us this long to get the final stages completed, but sometimes life takes you on a few detours! Having waited quite a while to have this completed, I think we appreciate it that much more now that it's done.

We'll be taking a bit of a break from major household improvement projects for a while to relax and enjoy our latest accomplishments (and let our bank account recover!). We hope to do some work on our kitchen in the not-too-distant future, as it's been in a halfway redone stage for quite a while.

In the meantime, if you've done some budget home renovation projects lately, I'd love to hear about them!
Posted by Karen McLaughlin at 11:21 AM