It's that sweet part of the summer that is so eagerly anticipated each year: the tomatoes and green beans are here! These are my two favourite fresh-from-the-garden vegetables and their arrival is always a cause for celebration!

Here's what I harvested from the garden this week: 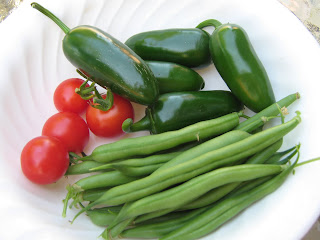 Five jalapeno peppers, four cherry tomatoes, and a handful of green beans. I do believe a few more cherry tomatoes got eaten straight off the plant by someone who shall go unnamed :)

There is plenty more garden goodness on the way: 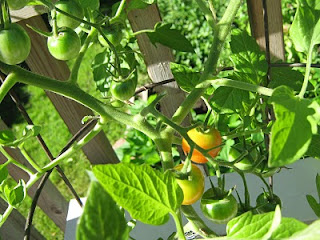 Lots more  cherry tomatoes coming - these are the biggest, healthiest cherry tomato plants I've ever grown! We've had ideal growing conditions this year and it's amazing to see what a difference that's making in my garden (especially after two very cold and rainy summers in a row!) 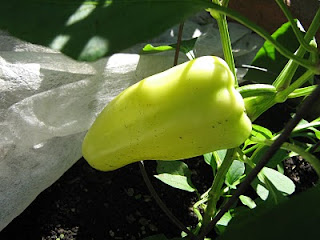 I've got a couple of nice-sized sweet peppers that I've left on the plant for now. They're a variety called "Gypsy" that I've never grown before. They are purported to be "the sweetest pepper available", with "heavy yields of orange-red fruit". I picked this variety more because of its quick time to maturity (I was really late planting this year) so I'll be interested to see how sweet and abundant they really are :) I'm still waiting to see signs that they're going to deepen in colour to orange/red. I figure I'll leave them on the plant a while longer and see what happens!

There are plenty more beans on the way, too: 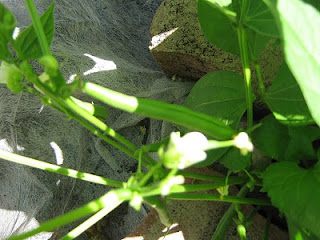 I staggered my green bean planting this year, so there are a bunch of plants coming to maturity now, and another bunch that are just starting to grow. This is the first year I've tried growing them this way, with the intention of having a reasonable amount of green beans to harvest each week for a longer period of time, rather than an onslaught of them all at once. I guess I'll soon find out how well that idea worked!

And last (but certainly not least!) are my Roma tomatoes, which are growing just as vigorously as everything else in the garden! These plants are just *covered* in flowers, meaning there are a whole lot more tomatoes on the way. The first of them will be ready for picking soon: 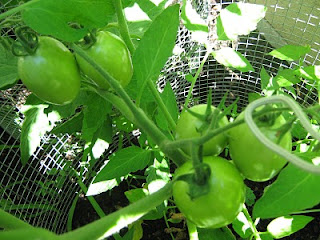 All this bounty from my tiny urban garden! How is *YOUR* garden growing?

This post is linked to $5 Dinners garden update.
Posted by Karen McLaughlin at 11:25 AM