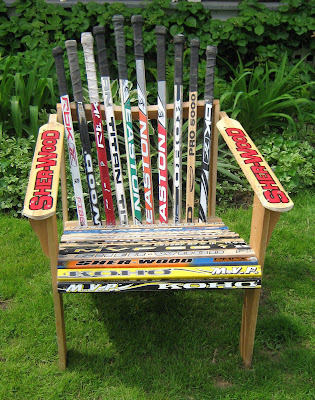 You just know you're married to an All-Canadian Hoser Hockey Jock when he spends the Victoria Day weekend building a Muskoka chair out of hockey sticks (for all my American readers, the Muskoka chair is the Canadian cousin of the Adirondack).

I do have to give him credit, this was a great re-use project; he didn't have to purchase a single item to make this chair. He says the original inspiration for the chair came one night when he broke his goalie stick during a game. He looked at the no-longer-useful-for-hockey stick and thought "hey, this is some really good wood - what can I do with it?" He then came home and saw the Muskoka chairs sitting on our front porch (that he built well over a decade ago) and went "Hmmmm - hockey stick Muskoka chair?" and a plan began to take shape. Once he got the idea, he also found other hockey-obsessed guys who'd done the same thing on the internet :) This site has a good materials list, but you need to purchase the actual plans. If you're an experienced builder, you can adapt any basic Muskoka or Adirondack chair pattern to work with this idea.

To make the chair as shown, my husband used about 20 broken hockey sticks (including 2 goalie sticks for the arms). He started scrounging around local arenas looking for busted sticks, and did come up with a few. He really hit the "mother lode", though, when our next door neighbour found out what he was doing and mentioned she had a friend in Brantford (about 30 min away) that built hockey stick furniture and who usually had more busted hockey sticks than they could use. When he contacted this fellow hockey-stick-furniture-building aficionado, he discovered that it was none other than Walter Gretzky (that would be Wayne Gretzky's father for the completely hockey-clueless) who went around gathering up expired hockey sticks and bringing them to this guy! So a good portion of the sticks in this chair came to us courtesy of Walter :) 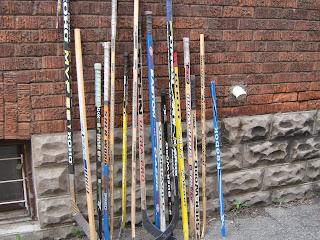 Additional materials used for the chair include about 14 feet of 1 x 4 (from an old wooden futon frame), about 8 feet of 2 x 6 (pulled from a dumpster) and 80 #8 x 1 1/2" wood screws plus 8 #8 x 2" wood screws (these were all in our basic "screw stash", most pulled from disassembling other no-longer useful wood items like the futon frame). You'll also need some urethane for clear-coating the completed chair (this step hasn't been done yet on the chair in the picture). Make sure you get clear-coat that's rated for outdoor use. 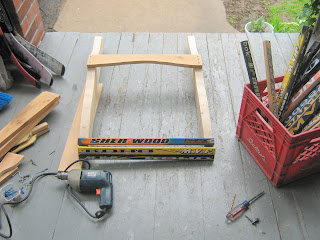 Putting the seat together 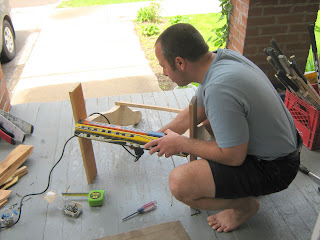 Getting the angles for the legs just right is really important! 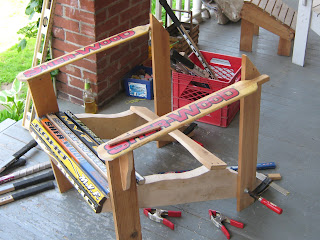 Ready to start putting the back together. 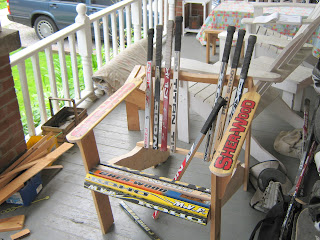 The back in progress - probably the fiddliest part of the project.
I love projects like this where you end up with a completely functional, unique product, built completely from stuff that most people would have thrown in the trash!
Have you completed any great "reuse it" projects lately? If so, please share!
Posted by Karen McLaughlin at 12:05 PM